The laser-supported tape laying or winding is used to manufacture high-performance lightweight components such as aircraft wings. These processes are regarded as a promising option for processing endless fibre-reinforced thermoplastics. Unidirectional tapes, so-called UD tapes, are generally used in the tape laying process. UD tapes are endless fibre-reinforced tapes of different widths with unidirectionally aligned reinforcing fibres in which glass or carbon fibres are embedded so ideally in a thermoplastic matrix that completely new possibilities arise in the production of components.

Now there are differences in the further procedure, because during tape laying, the connected thermoplastics are guided over the tool mould in a load-adapted path. On the other hand at the tapewinding process, it moves around a winding core. The UD tape strips away from a supply spindle and is welded to the already processed tapes by continuous laser irradiation.

The winding process is particularly suitable for the production of complex three-dimensional components such as tanks.

In addition, we offer you our support from concept development through tool manufacture to production. Do you need further information? Then contact us by e-mail or give us a call. 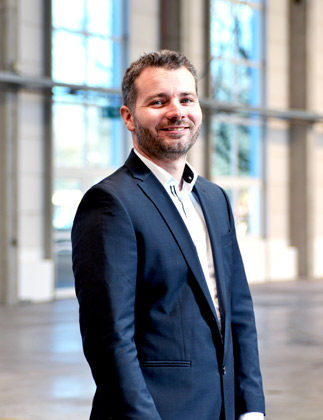